This tutorial explains to you ‘how to make a Lantern in Minecraft’ step-by-step.

A lantern is a source of light such as a lamp or torch to illuminate your Minecraft base.

Lighting is so instrumental in this game where bad things and evil creatures will spawn if there isn’t enough light making sure your build is totally lit.

For this reason, you need to light up your base.

Let’s explore how to craft a lantern in Minecraft.

A lantern is available in the following versions of Minecraft:

How to Make a Lantern in Minecraft

There are two types of Lanterns in Minecraft:

As a matter of fact, Lanterns were added to Minecraft in 1.14, the first release of village and pillage.

Lanterns are beautiful pieces of decoration but you can not place them on a wall like a torch.

To make Lantern in Minecraft, you need:

Here is a breakdown of all the steps to make a Lantern in Minecraft.

You need a stick and a piece of coal to craft a torch.

Place one piece of coal in the crafting GUI in the centre of the 3×3 grid.

Put the stick underneath it.

Move it to your inventory.

Once you have the torch, you need to get iron nuggets.

BOOM! you’ve learned how to make a Lantern in Minecraft.

There is one specific thing you need to know about.

This item is Soul Lantern.

It is like a regular Lantern, except that it has a blue texture to it.

How to make a Soul Lantern in Minecraft

You can craft a soul lantern in Minecraft in the same way as above except that you use a different type of torch in the same recipe.

Here’s how you can craft a soul lantern:

That’s all for crafting a recipe for a soul lantern.

Below are some important and useful questions and their respective answers on the topic at hand:

How do you make colored lanterns in Minecraft?

You can color lanterns in Minecraft by combining any lantern and the dye you want in a crafting table, or by shift-right clicking a placed lantern with the dye in your hand.

This way you can switch colors to make your own desired color lantern-like a purple torch for example.

In the example below, the blue lantern recipe is shown:

How to Allocate More RAM to Minecraft

How do you make a blue flame torch in Minecraft?

How to Drop Items in Roblox

How to make sea lanterns in minecraft

How to Add Friends on Nintendo Switch

How to Make hanging Lanterns in Minecraft

You can make a floating lantern in the following way:

This works for all kinds of gravity block which include concrete, powder, sand and gravel.

Are lanterns better than torches in Minecraft?

Lanterns are more expensive than a regular torch because they require iron to make.

How to Unban Someone on Discord

Do lanterns stop mobs from spawning?

As long as the light level within the spawn radius is raised high enough, no mob will spawn.

This is also true for a torch or any light source.

Can you put torches on glass in Minecraft?

It can be placed on the top of glass blocks.

What do blue torches do in Minecraft?

They give off a nice calming blue light, and like the campfire, they repel Piglins, too.

That’s always useful if you just want some alone time.

Can you hang lanterns in Minecraft?

You can hang lanterns from blocks and fences, but not iron bars.

Are Piglins afraid of soul torches?

Piglins ignore soul fire items when running after the player but they still stay off from zoglins and piglins.

Unlike normal torches, soul torches will not melt snow and ice.

Therefore, the Redstone torch will not totally stop mobs from spawning, but to a certain extent.

Soul Lanterns give off a blue glow and ward piglins away from you.

Do Soul Lanterns give less light?

They produce slightly less light just 10, compared to 15 for a regular lantern.

It is ideal in a snowy biome.

How to Fix PS5 Controller Drift

Can you hold a lit torch in Minecraft?

How many Blocks does a Torch Light up in Minecraft?

A torch provides 14 lights to adjacent blocks and one less light per block of distance.

Can you put a Lantern on a Chain?

Chains help to suspend bells or both types of lanterns.

The chain texture connects to the chain of the lantern easily as it were part of it.

Therefore, it seems as if you’ve made a hanging lantern in Minecraft.

How to Put a Lantern on a Chain in Minecraft

According to Reddit you can hang chains from the ceiling and can have lanterns attached to them.

How do I turn a Redstone Torch off?

Redstone torches charge everything next to them.

If it has a solid block directly above it, anything adjacent to that block is powered.

Redstone torches never burn out on their own.

You have to power the blocks they’re placed on to turn them off.

If you provide power to the block that the torch is attached to, the torch turns off and no longer functions.

When the connected block is no longer powered, the torch turns on again.

There is no current way to stop mobs from spawning that doesn’t involve lightening an area.

Can torches burn wood in Minecraft?

I hope today’s tutorial has helped you to learn how to make a lantern in Minecraft.

It is very important that you illuminate the area around yourself because, in the early days of Minecraft, light sources were limited with torches and Jack o’Lanterns being relied upon.

Now, you can make darker areas lighter and brighter.

They are also nice to look at too.

For any type of questions, ask us. 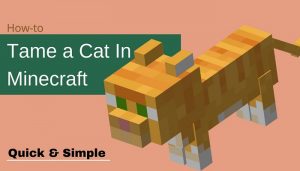 How to Tame a Cat in Minecraft 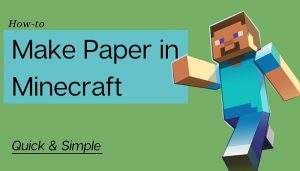 How to Make Paper in Minecraft